It was a Great Day!


We had a mission, today. Bill McGown and I were to meet some new friends. We arrived at the Menge Ave flea market in Long Beach, Mississippi a little early for our 10AM meeting with Lee McKee, so we hit the tables. Nothing casting related, but I did buy a couple of new, ball bearing pneumatic tire/wheel assemblies for my hand truck for $5.00 each. Some of this stuff is so cheap, it's scary!

10AM rolled around and we met Lee, right on time. It was just starting to rain, so we headed under the steel awning and grabbed a table and got to know one another. Lee had a folder with some great pictures from a place near Birmingham where he had helped do some art related iron casting. As we shot the breeze it continued to rain. Bill talked about pewter casting in RTV silicone molds. He has an oyster shell in pewter that is just exquisite. We had brought it with us to show, but it was in the truck and none of us was anxious to go get it! It seemed the longer we talked, the harder it rained. At one point we were forced to move, table and all, to avoid the flooding coming across the asphalt floor. With the drumming of the rain on that steel roof and everyone around us talking louder on account of it, we had trouble understanding each other across the table! It finally let up enough to get to the parking lot and we parted ways with promises of future get-togethers.

Bill and I proceeded to Picayune, MS to visit Glen Bond. You may have seen his web site: http://lodestone.dynodns.net/ (this link is now defunct. The new link is http://www.metalstop.com/ ). Glen is documenting his progress designing and building a 2 cylinder gasoline engine from scratch. He has cast much of it and machined almost all of this amazing engine. Glen greeted us from the open door of his garage/shop. Luckily the rain had largely abated, but we still got a little wet going from the truck to the shop. Glen had his engine on the bench for us to look at. Next thing I knew he was disassembling it so we could get a better look! What a guy.<GRIN> Click an image for a larger view. 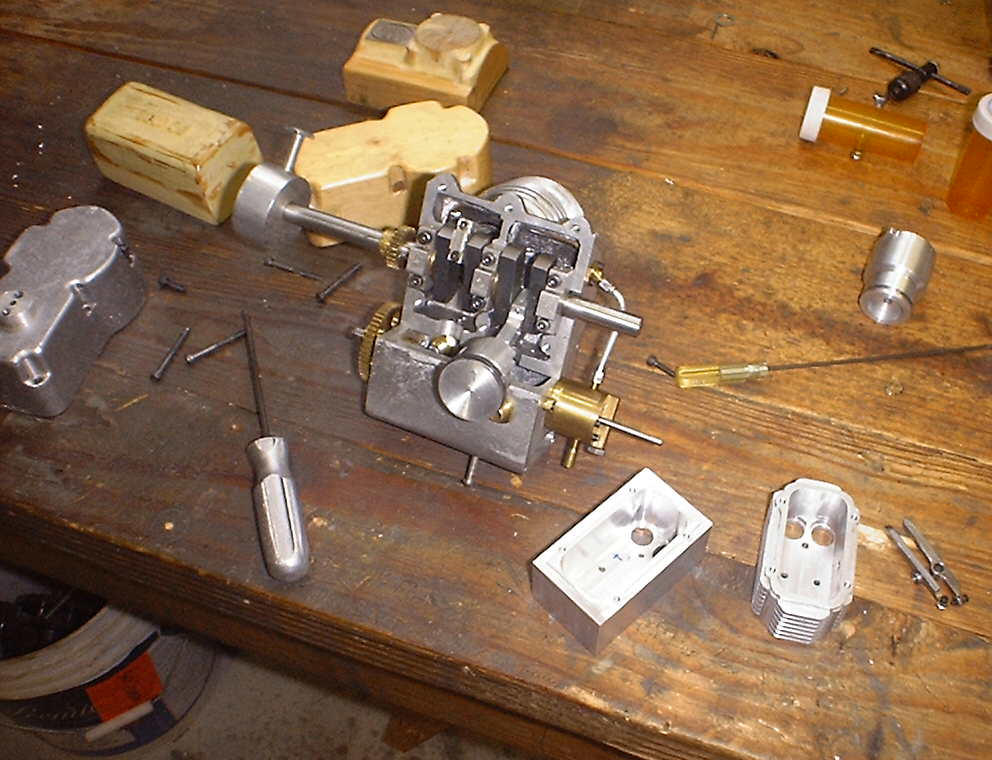 Notice the patterns beside the engine. 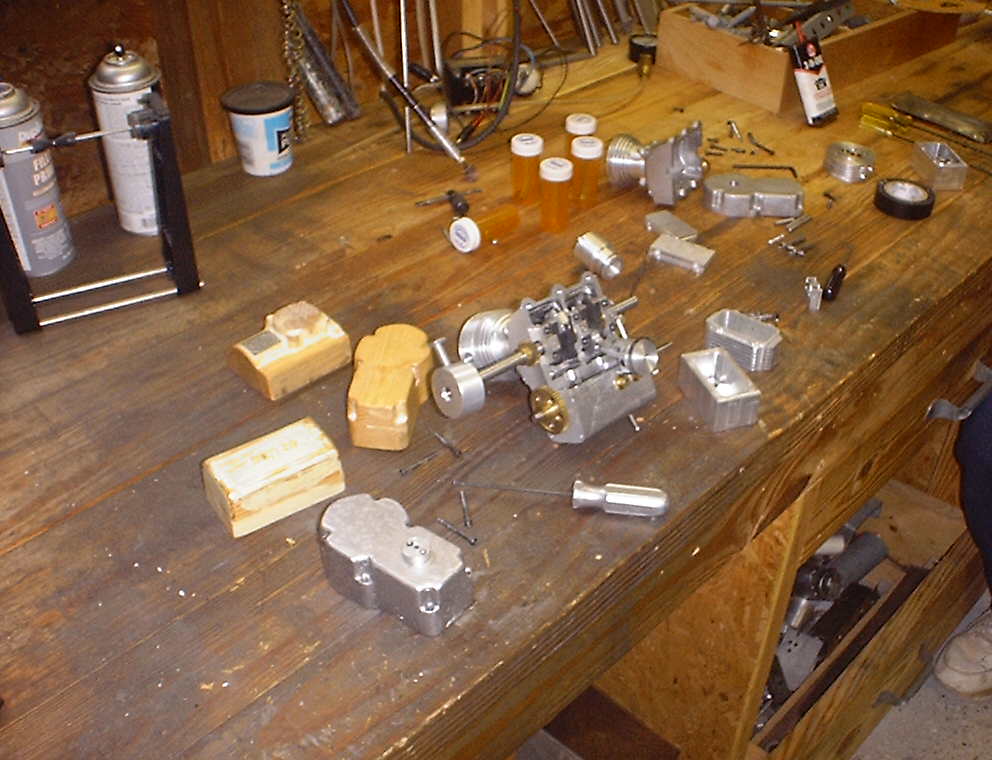 On the lower right is the box of past parts. These are the ones that didn't make the cut for one reason or another or are from older projects. Glen says he seldom remelts these unless he is desperate for material. 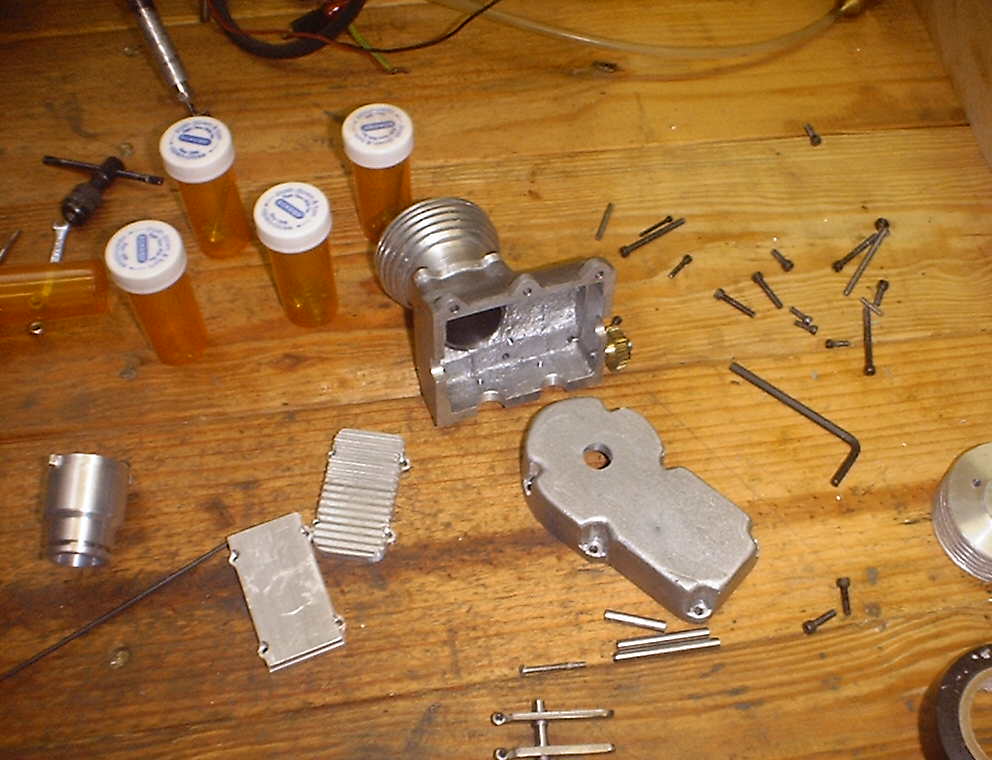 If you look at the enlarged picture real close, you can see the valves inside the pill bottles.

Glen did the machine work on a Smithy 3 in 1 machine. But he has some other interesting items in his shop! His power hack saw is his own creation. After seeing an old magazine article on the internet, he decided he didn't like some parts of the design. So in typical fasion for a guy that makes engines from scratch, he redesigned it. 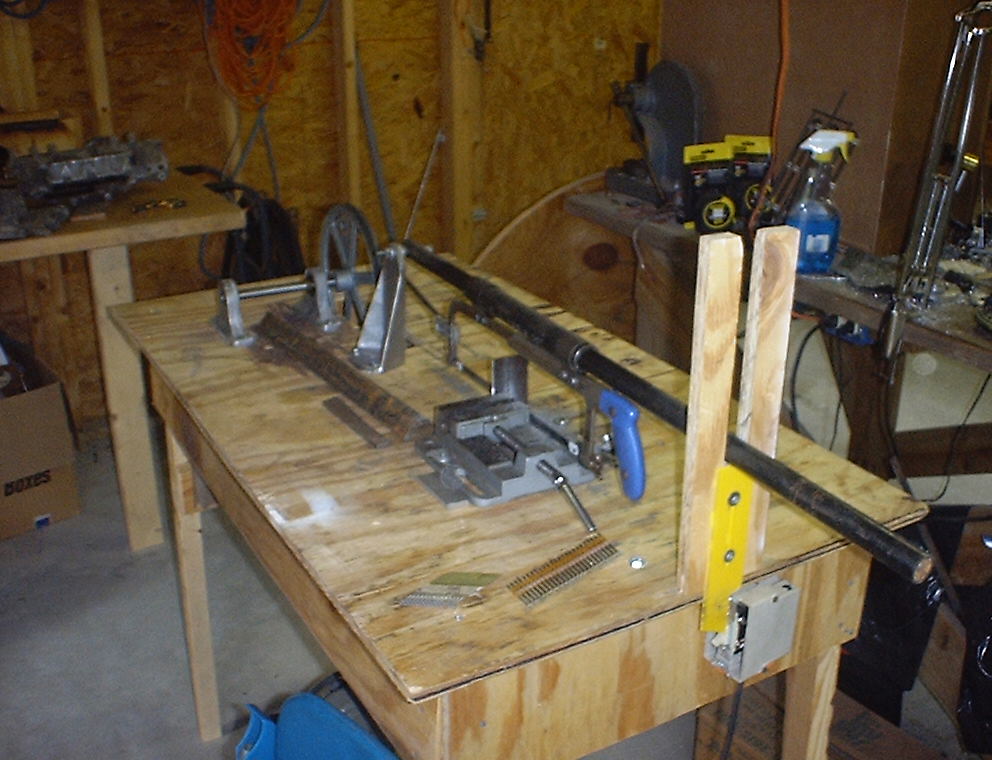 Whenever he needed a part, like the pivot mount or a pillow block to hold a ball bearing, No problem. He just fabricated a pattern and cast it in aluminum. Aren't foundries great! 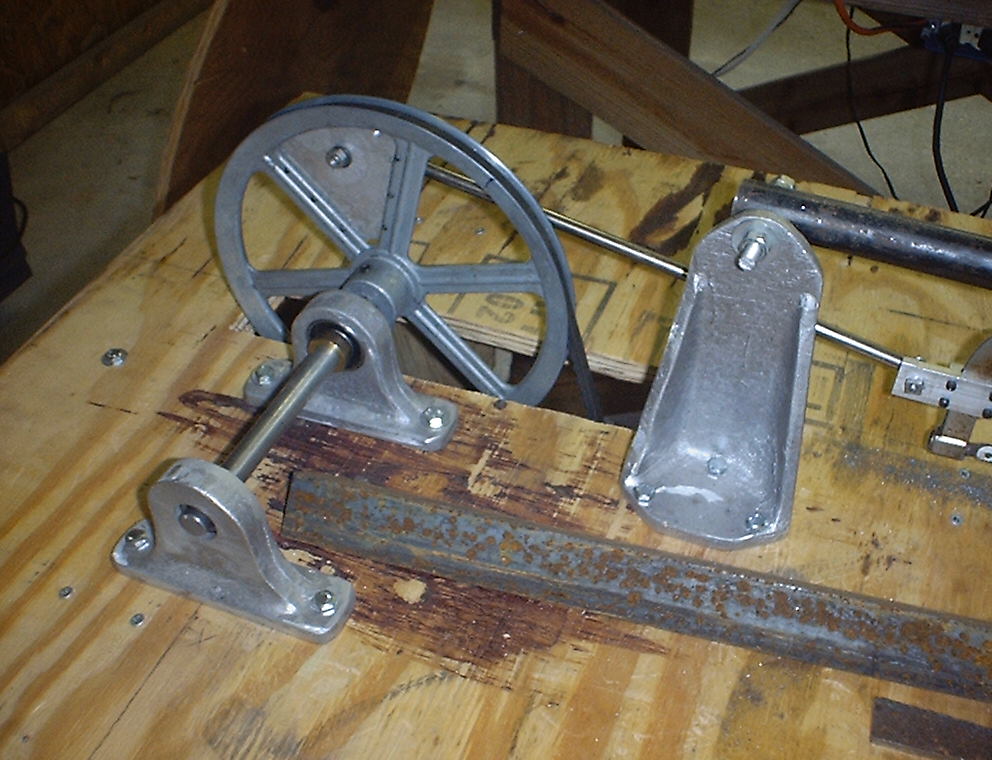 I was looking at his patterns and noticed the filets were reddish looking. I asked Glen if this was Bondo. He said yes, that he had always heard how good it was for patternmaking, so he decided to try it. Says Glen "I'll never go back to wood putty!" Bondo is ready to go in 15 minutes where the wood putty he was using had to dry overnight. 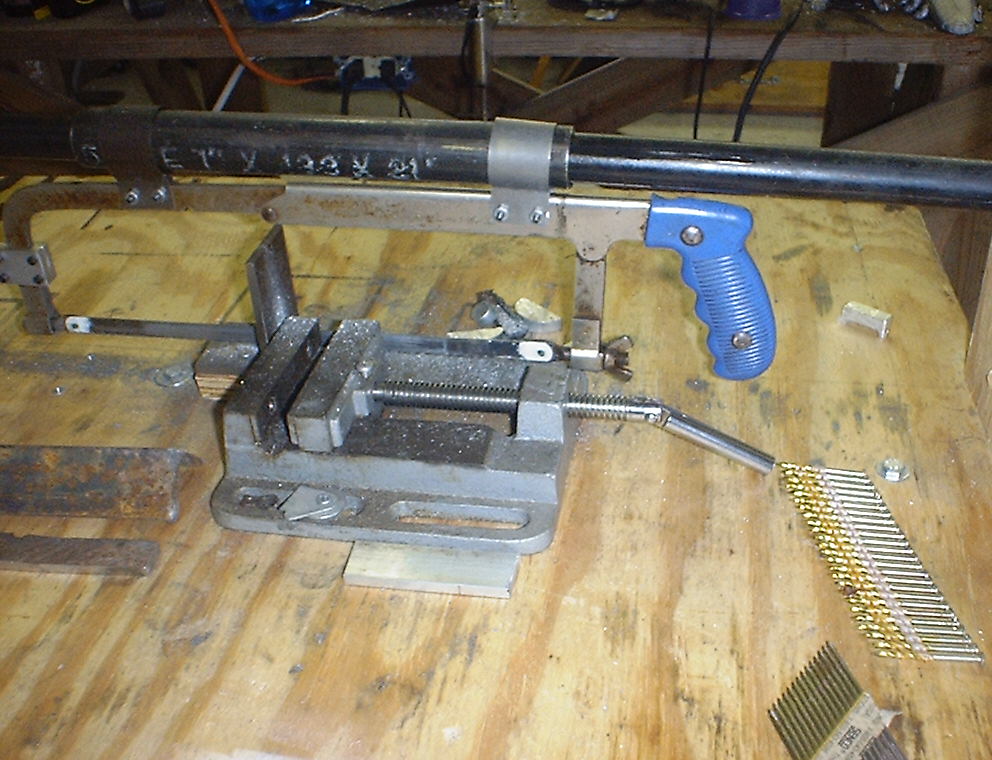 It looks like black iron pipe for the slide. A drill press vise does the honors quite well. 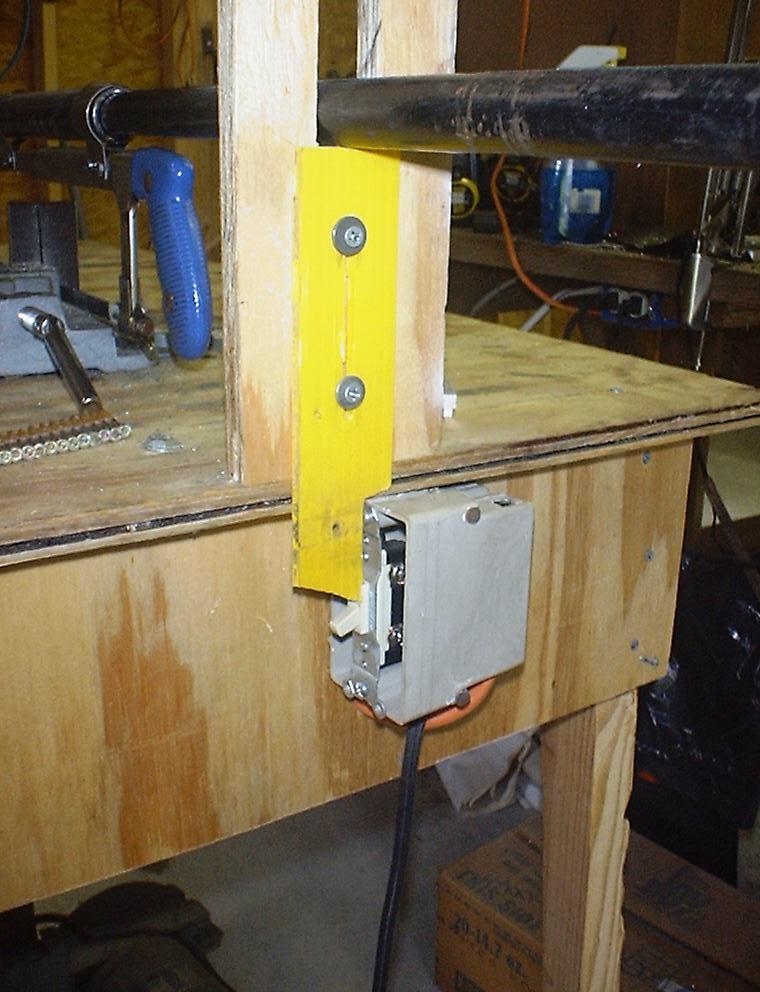 A clever arraingment to allow the saw to shut itself off when the cut is through. I saw some left over pieces on the table. They looked as good as the cuts on my bandsaw. 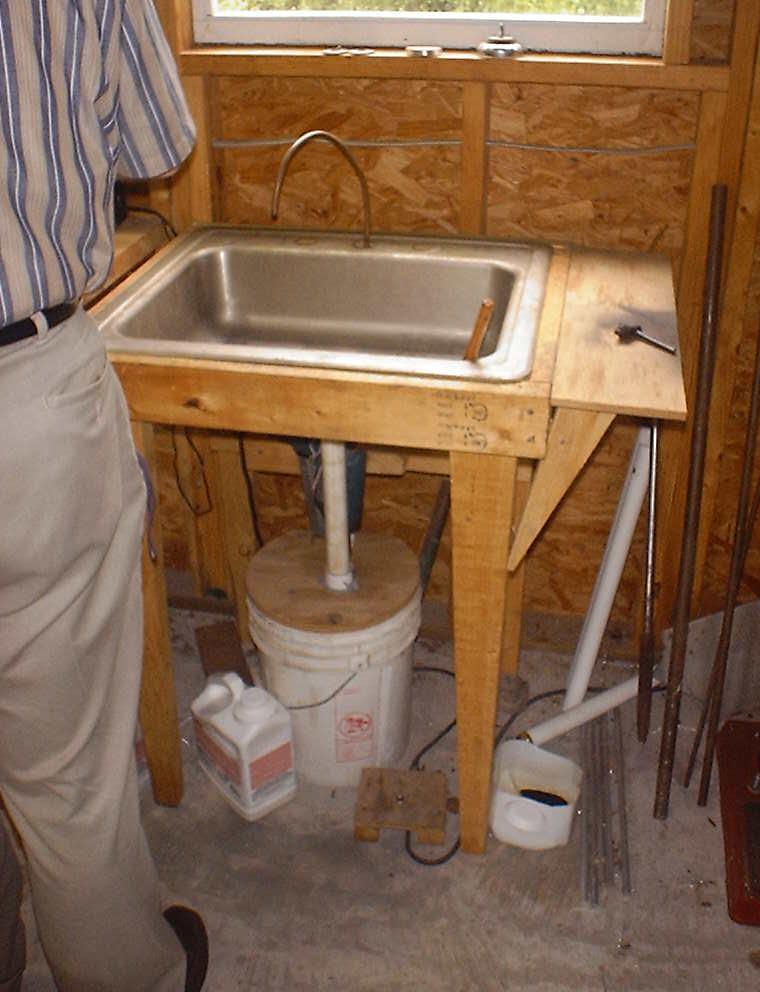 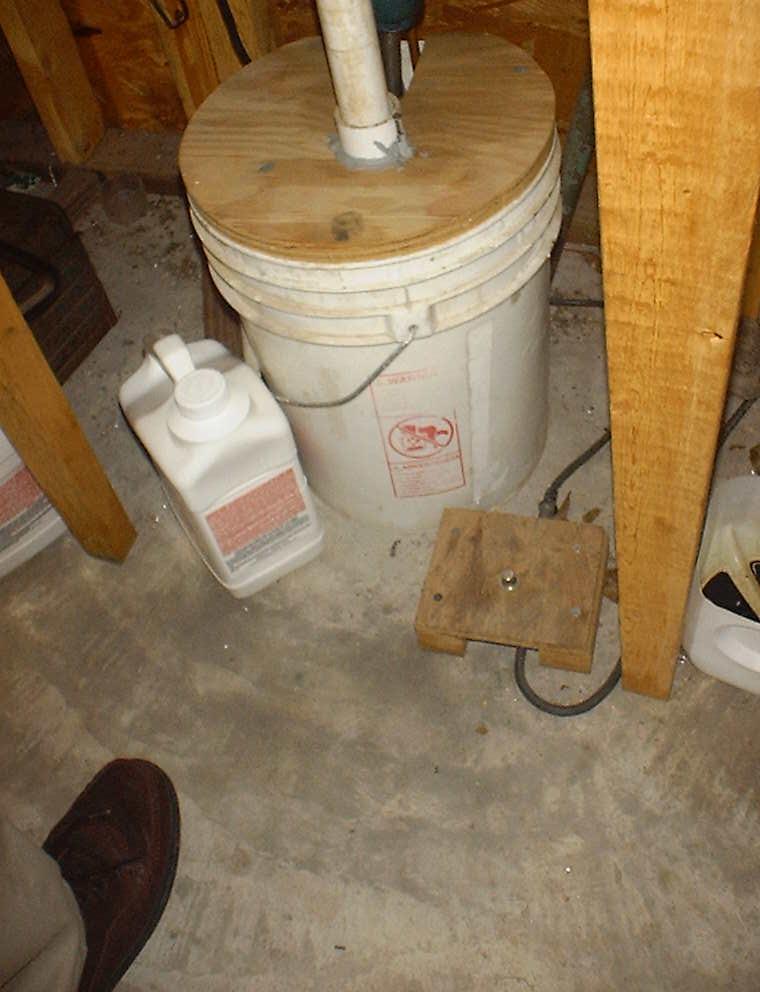 The jug is mineral spirits. 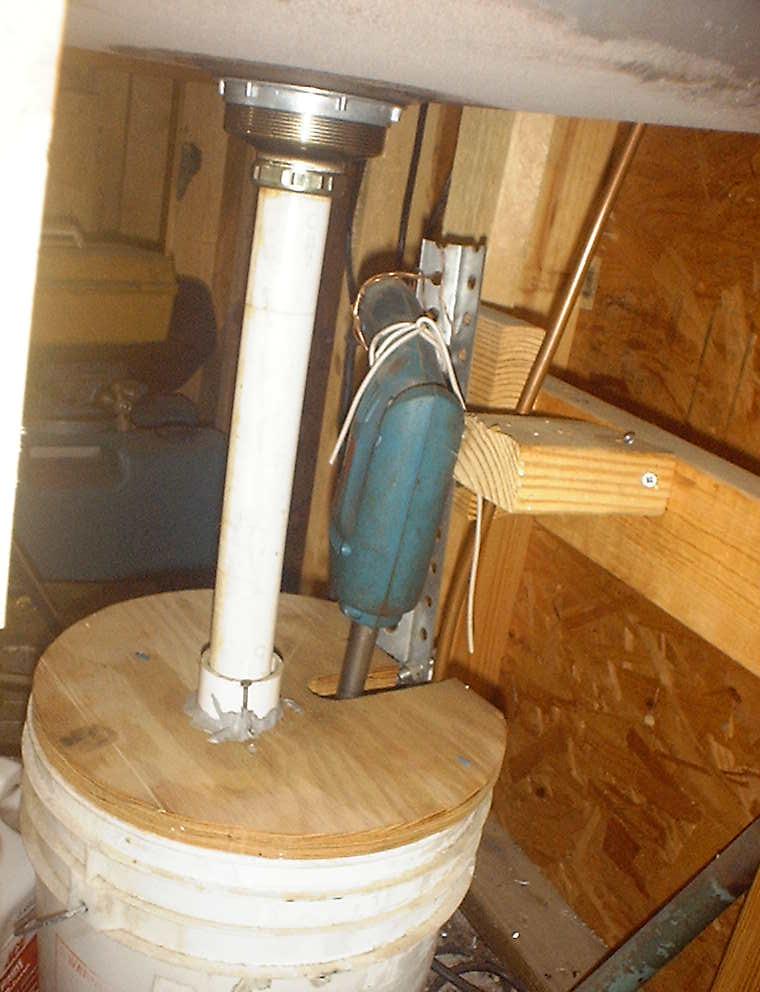 The heart of the matter is an old drill with the trigger wired in the on position. It drives a shaft to an automotive oil pump in the bucket. The cleaning fluid travels up the copper tubing which doubles as a flexible spout.

All in all a great day!

Have fun and safe casting!